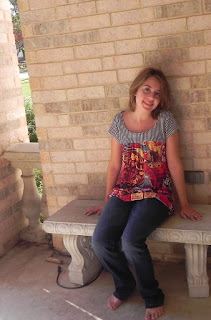 Well, this was suppose to be for me.  I had cut it all out when my daughter declared that the rock'n'roll print would be a problem on someone my age. :(  I think she just wanted it for herself...haha.  So instead of waiting to get the call from "What Not to Wear." I recut this down to a size 34 instead of the 38. I'll have to make that sequined mini skirt for myself and go pick her up from the homeschool coop.  : o ) 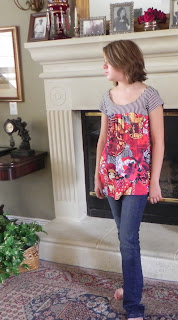 The biggest change I made was cutting the sleeves into a cap sleeve silhouette. She suggested that we turn this into a dress by adding a 3-4 inch band at the bottom.  We toyed around with some scraps and I do believe it would make an adorable dress too. 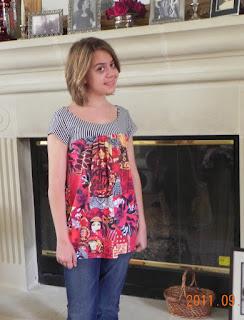 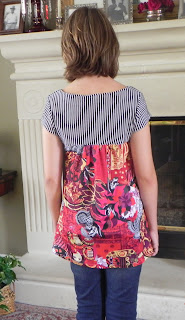 Some of the sewing changes I made: I gathered between the arrows by zigzagging over some dental floss.  I started to try it the Ottobre way with clear elastic but my machine kept eating it. Instead of persevering, I just did the old TNT way.  I interfaced the neckline front and back with Sew Keyes' knit fusible tape. The outer yoke is with a medium weight rib type knit. So, I used a thinner black jersey for the inside lining. I thought it would be too thick if I used the stripe on both sides.  I did not finish the bottom edge of the yoke with a serger because I figured it would grow too much. When I completed both sides of the yoke, the neckline wanted to bag out a little in the front and back.  I fixed this with a 1/4 inch top stitch around the neck.
That's about it!  It was pretty simple little top to make.
Posted by Claire Sews at 1:25 PM

Please look at my Etsy shop and videos

Claire Sews
plano, texas, United States
I am very passionate about sewing. I find it very stress relieving and quite fun. I am the mother of two, a 19 yo girl and a 25 yo son. My daughter is now a working girl and my son has cerebral palsy from birth. My daughter is constantly stretching my sewing ability with her fancy clothing requests and my son's very disability has helped me. Since he was born, I have always been in search of how to do the things he needs quicker and easier with less frustration. In fact, we created a hands free drinking system, a mobile wall mount for his television and many other fun things for someone who has mobility issues. The rulers are my first adventure in actually figuring out how to get things manufactured. All my SA Curve products are made in the USA. I absolutely love my rulers and reach for them as often as my rotary cutters.